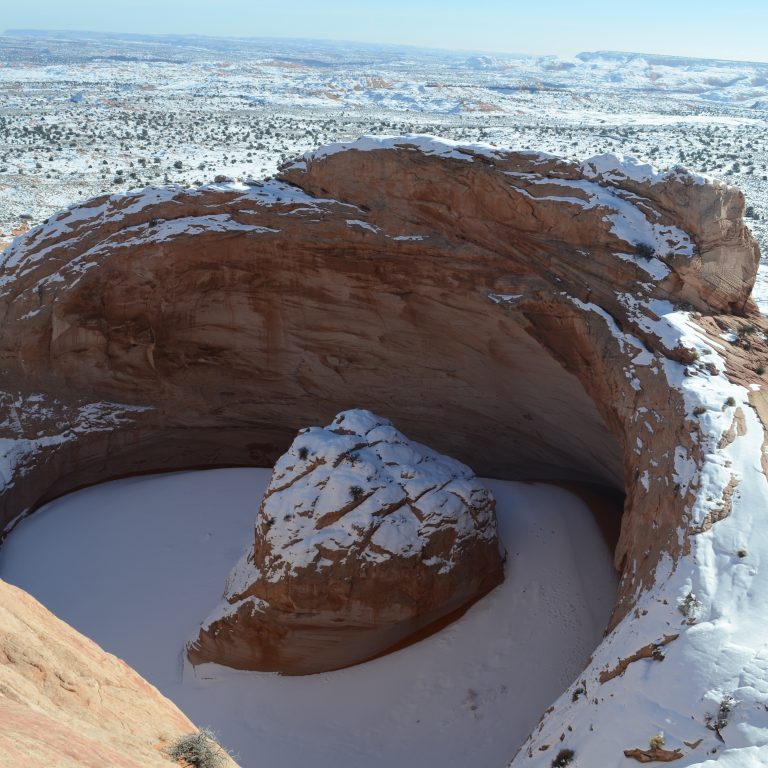 Recently, I tagged along with the Turn-About boys and a few of the staff members to hike to one of Escalante’s strangest treasures: the Cosmic Ashtray. The formation resembles a volcano at the top of a sandstone mountain, a rock island resting in the center of its “crater.” In winter, it is quite a spectacular scene. The red and yellow sandstone mixes with the white of snow, and the whole landscape looks like a giant Cold Stone tabletop filled with ice cream and crushed candy. The winter makes Escalante seem to glow. 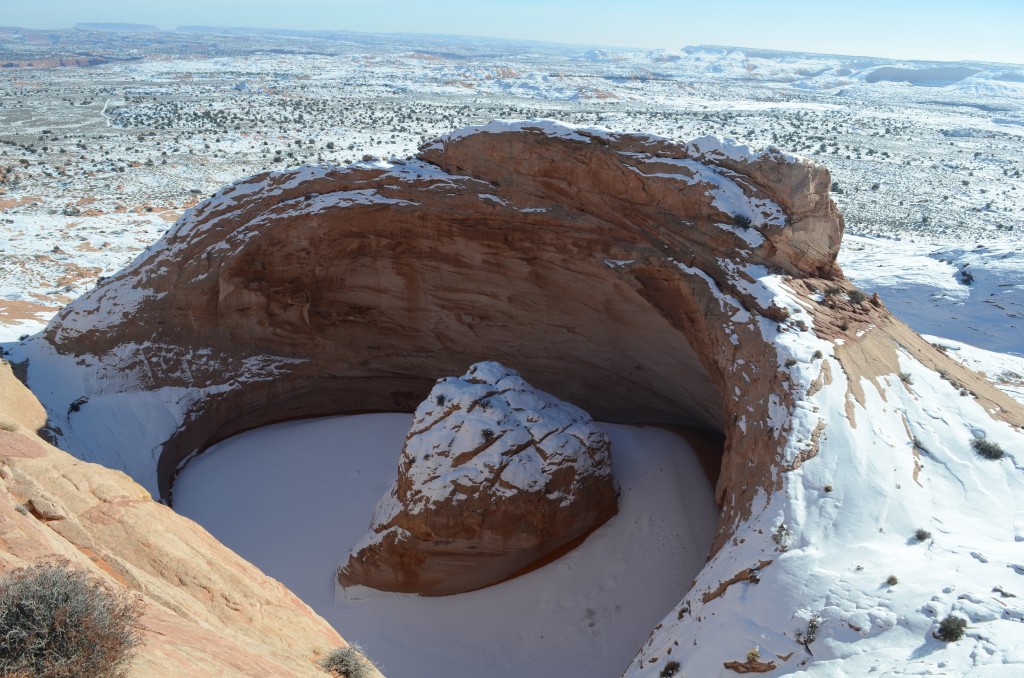 At the trailhead, we took a closer look at the snow, and we were amazed to see huge ice crystals all over the ground, with some of the shards exceeding the width of a finger. At the trailhead, the ice crystals reflected so much light from the sun that it felt like we were walking on silver and gold. The reflection was so bright, we had to shield our eyes constantly. There couldn’t have been a better way to start the journey. 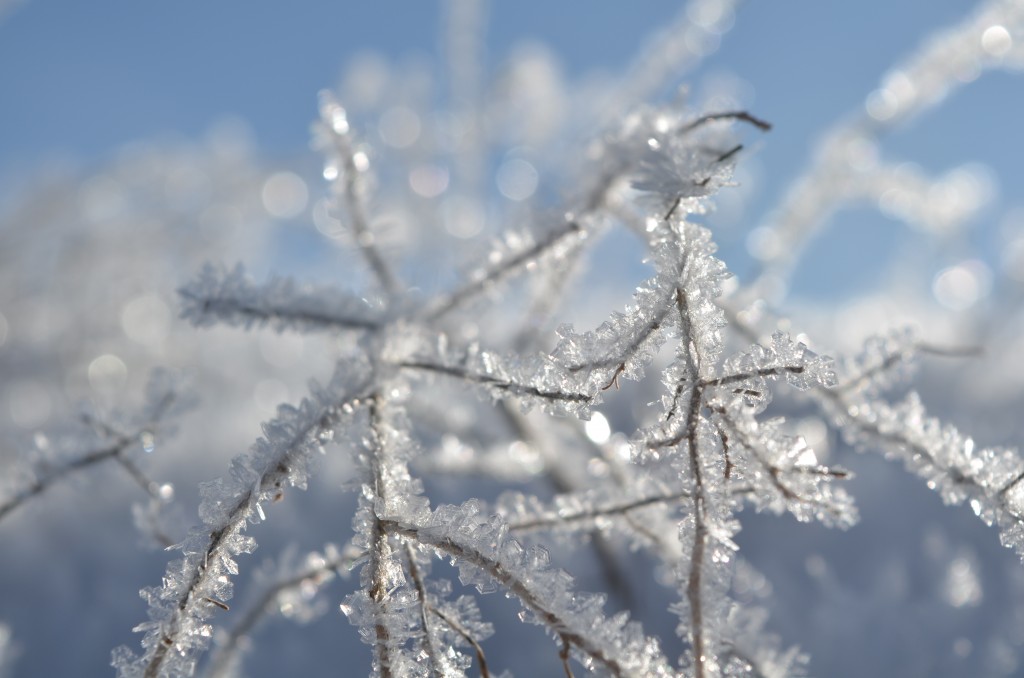 After a few minutes of observing the natural wonders of the place, we began our ascent up the mountain. Because the trail was completely south-facing, the sandstone was clear of snow with the sun’s warmth reflecting back. For some of us, it was warm enough for shorts and t-shirts, even in mid-winter. 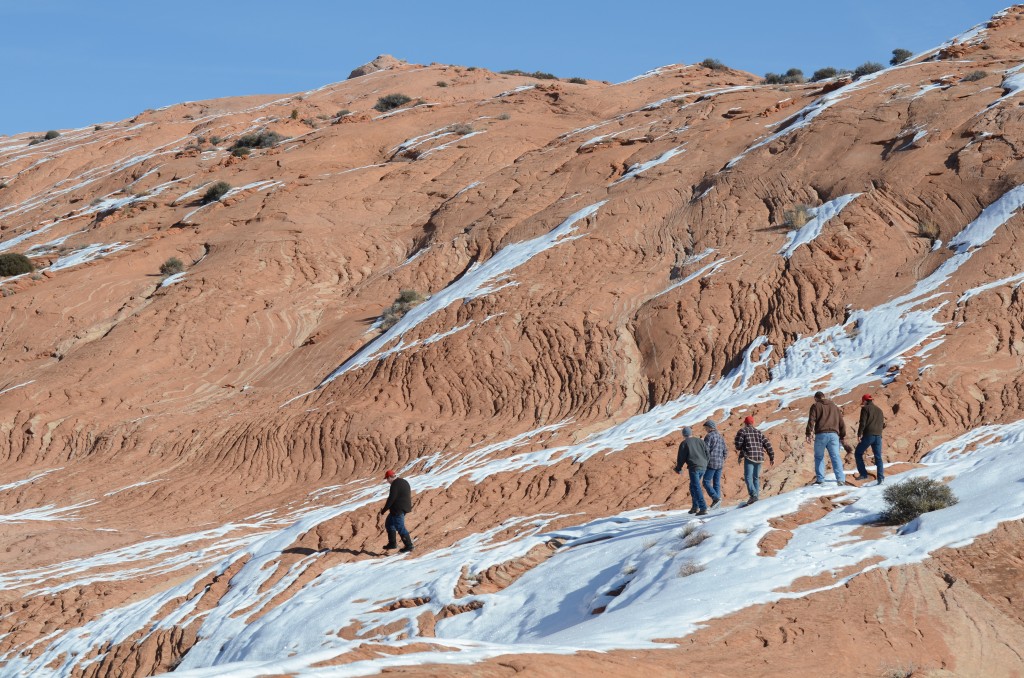 The further we climbed, the better the view, so that eventually, we could spot the Henry Mountains 30 miles to the East. To our south, we could see the faint outline of Navajo Mountain, which is partially in Arizona. It is amazing to think that you can nearly see to another state from that point. 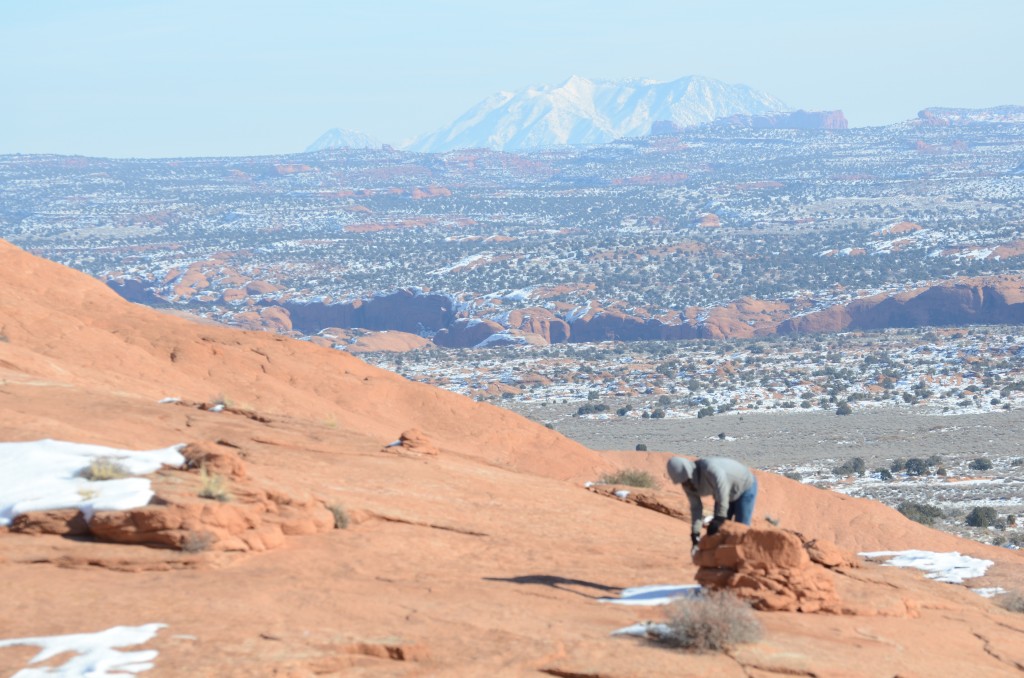 Notice the Towering Henry Mountains in the Background.

At the top of the mountain, we traversed around the rim of the giant sandstone bowl. Because of the dangers of slipping in the winter, there was no way of getting in, but we threw down a rope to measure the depth: about 60 feet or more, from the lowest point, 120 feet or more from the highest point. The camera doesn’t quite capture the size of the Cosmic Ashtray (unless you notice the boys standing to the right). 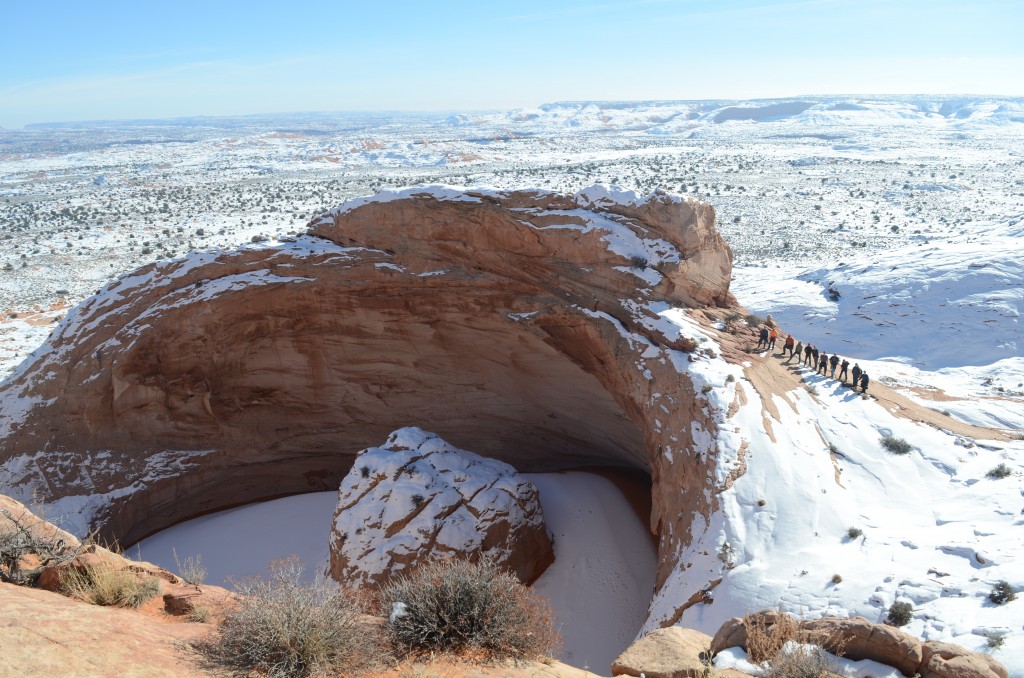 After we explored the area, each boy sat down in a circle and took a moment to contemplate the hike and what it meant to them. Reneé, one of the counselors at Turn-About Ranch, discussed the Cosmic Ashtray as a metaphor for casting away worries and struggles. In turn, each boy talked about what they would cast away in their life, whether it be feelings of inadequacy, unhealthy habits, or bad memories.

Everyone seemed to look a little lighter after that, as if they had literally cast off physical weight into the Cosmic Ashtray. 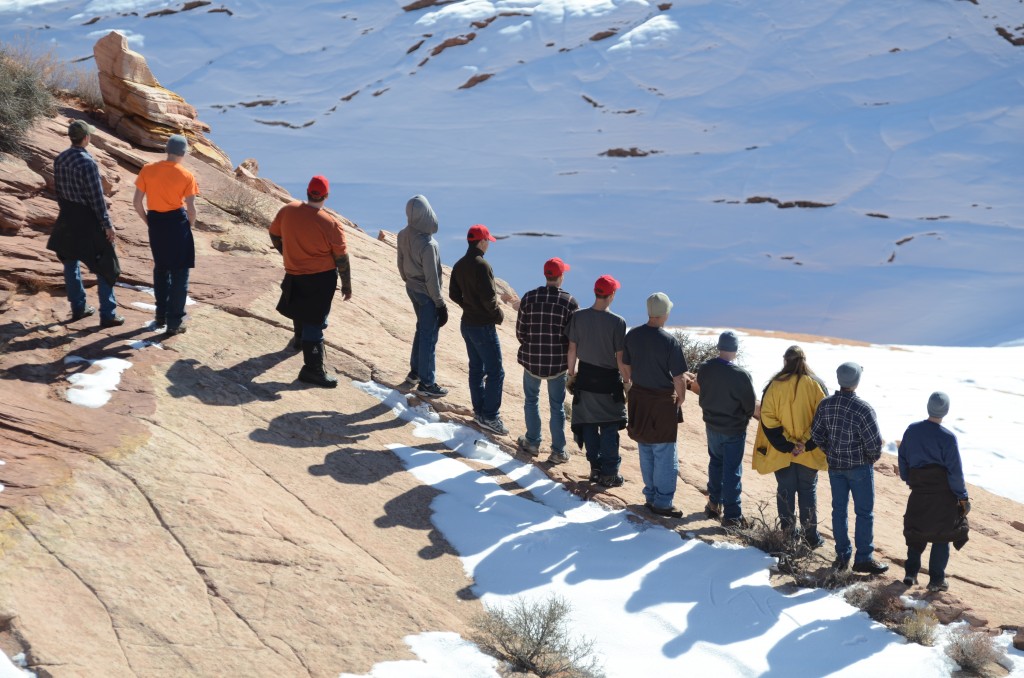 With spirits elevated, we coursed down the mountain as if we had forgotten about our exhaustion, thirst, and hunger. The trip back breezed by. Despite the difficulty of the hike, the boys managed to comb back and forth over the sandstone and discover all sorts of desert gems. The staff had a laugh when the boys found a frozen puddle to skate on. Each boy, in turn, got a running start and would slide twenty feet or so. They had the time of their life on several ice formations throughout the rest of the hike, not to mention their discovery of the perfect arena for sledding and a bit of snowball target practice. 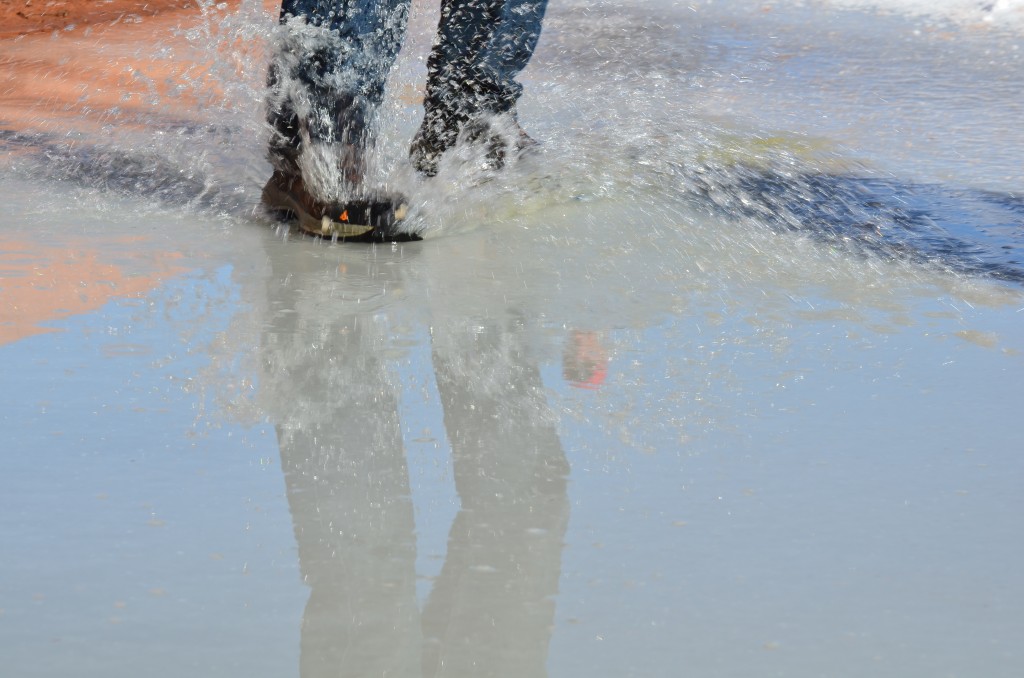 About a foot deep, the pond was frozen all the way through, minus the melt water on top.

Over all, the trip was very educational. We learned about the plants, animals, and geology of the desert. We saw first hand what very few tourists or even locals get to see in their life: remote Southern Utah in the winter. As restaurants and tourist operations in Escalante completely shut-down during the off-season, Turn-About Ranch students are still busy touring this wild National Monument. Turn-About students are truly lucky to have this mine of scientific knowledge right out the front door. 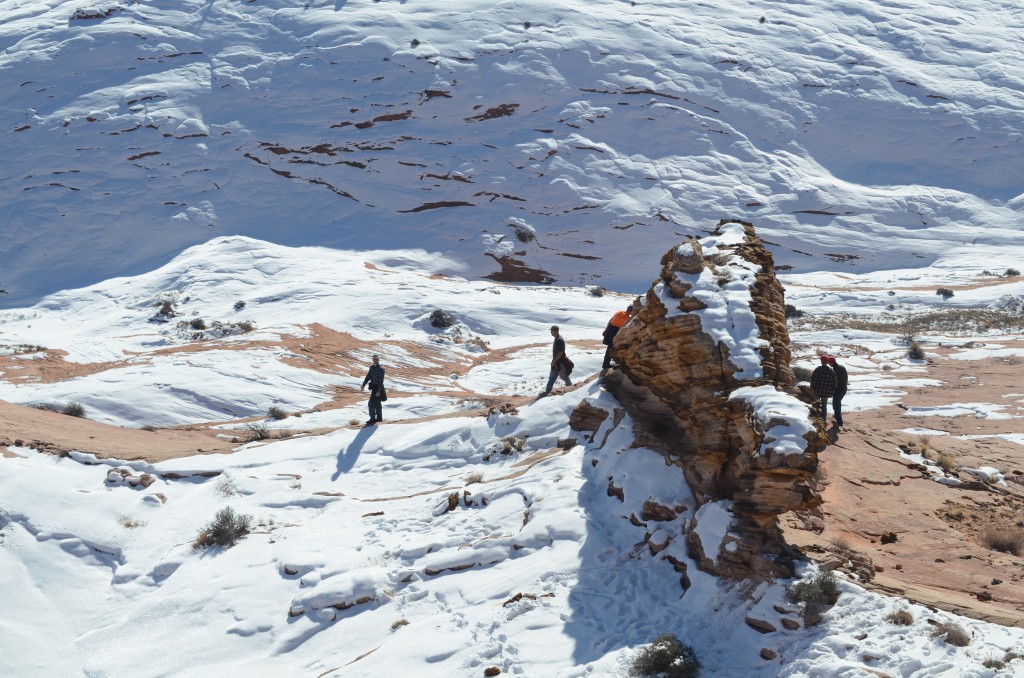